To Sleep Forever Among His Own: The Unknown Soldier 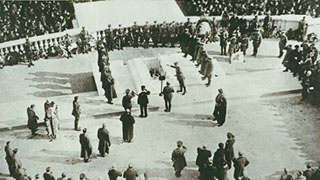 Fades the light;
And afar
Goeth day, cometh night,
And a star
Leadeth all, speedeth all,
To their rest.

The guns roared out again in the national salute. He was home. The Unknown, to sleep forever among his own.

— A Soldier Home From the Wars – The Pulitzer Prizes

The 1921 United Press newswire of the internment of America's original Unknown Soldier at Arlington National Cemetary.