With heavy infantry specialized to resist heavy cavalry and light infantry indispensable in sieges and finding its most effective employment in the field against light cavalry, the art of war about the year 1200 [C.E.] had these clearly distinguishable capabilities (using the symbol → to mean was superior to): 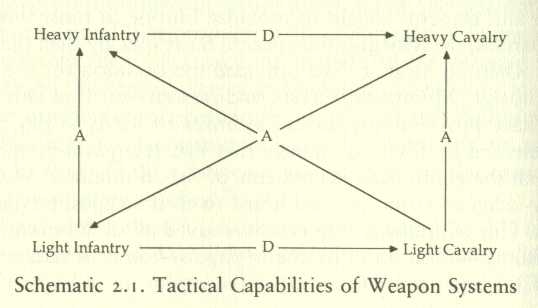 The ability of the cavalry to dismount modifies this diagram. When the heavy cavalry dismounted it became heavy infantry, and confirmed the generalizations that the man on foot is superior to the mounted man and [that] the defensive is stronger when the same weapon systems confront one another. Light cavalry could gain comparable advantages by dismounting, and in each case the dismounted cavalry in the defense could easily take advantage of terrain or artificial obstacles, something more difficult to do mounted. Medieval soldiers grasped and often exploited the value of dismounting heavy cavalry but, lacking light cavalry, could never make use of this transformation. They did occasionally mount bowmen, giving them the strategic mobility of the light cavalry. They more rarely resorted to a similar mounting of heavy infantry, probably because of their ample supply of heavy cavalry. Yet to have mounted heavy infantry on nags would have been a far more economical solution had knights customarily fought on foot. It would have saved the considerable cost of a robust war horse and the expensive, but unused, skill in fighting mounted.