Of Its Kind, the Last

So gorgeous was the spectacle on the May morning of 1910 [C.E.] when nine kings rode in the funeral of Edward VII of England that the crowd, waiting in hushed and black-clad awe, could not keep back gasps of admiration. In scarlet and blue and green and purple, three by three the sovereigns rode through the palace gates, with plumed helmets, gold braid, crimson sashes, and jeweled orders flashing in the sun. After them came five heirs apparent, forty more imperial or royal highnesses, seven queens—four dowager and three regnant—and a scattering of special ambassadors from uncrowned countries. Together they represented seventy nations in the greatest assemblage of royalty and rank ever gathered in one place and, of its kind, the last. The muffled tongue of Big Ben tolled nine by the clock as the cortège left the palace, but on history’s clock it was sunset, and the sun of the old world was setting in a dying blaze of splendor never to be seen again. 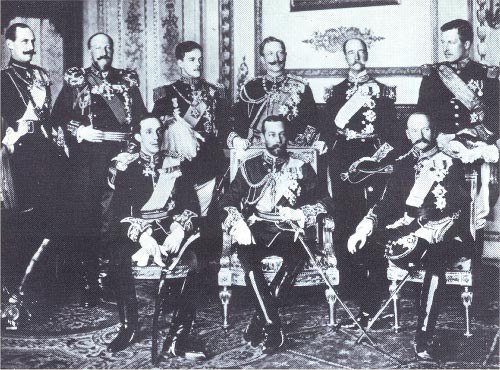 The photograph is not from The Guns of August. I failed to record what book I found it in. Imagine if it was a color photograph.