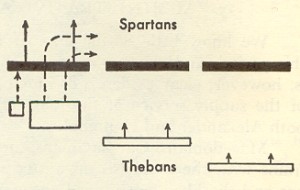 The Spartans drew up for battle in the conventional phalangial line, the best troops on the right, a few cavalrymen and light troops covering the flanks. They expected the Thebans to form in similar fashion. In such a battle the Spartans, superior both in numbers and in fighting quality, would unquestionably have been victorious. Epaminondas, however, refused to fight on Spartan terms. He quadrupled the depth of his left wing, forming a column 48 men deep and 32 wide. The remainder of his army, covered by a cavalry screen, was echeloned to his right rear in thin lines facing the left and center of the Spartan army. This is the first known example in history of the deep column of attack and of a refused flank, prototype of the holding attack and main effort of more modern times. Epaminondas personally led his left-wing column in a vigorous charge against the Spartan right, while his cavalry and the infantry of the refused center and left advanced slowly, occupying the attention of the Spartans to their front, but without engaging them. The Spartans were hopelessly confused by these novel tactics. The weight of the Theban column soon crushed the Spartan right. Epaminondas completed the victory by wheeling against the exposed flank of the remaining Spartans, who promptly fled when simultaneously engaged by the Theban center and right. The Spartans lost over 2,000 men; Theban casualties were negligible. Spartan military prestige was shattered forever.